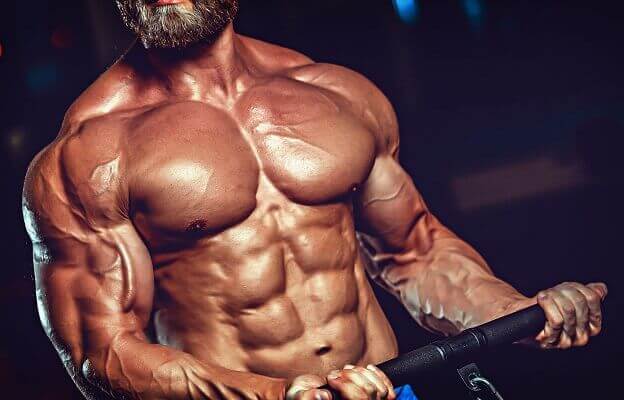 It seems obvious to any eye after shoulder workout, which is why it is the right choice to decide whether to work on it consistently using exercises for building front and lateral deltoid.

Moreover, The shoulders are one of the major muscles that will make a remarkable difference to the look of a bodybuilder, because they are located in the upper part of your body.

Before we get start in-depth into the best exercises, let’s quickly explain the structure of the shoulder muscle and take a look at the different layers and where they are located, this will make a better understanding of how to deal with them during exercise, and the best suitable routines that fits the most. 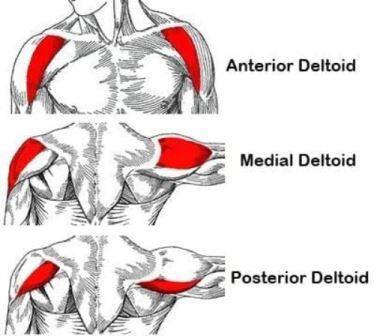 The shoulder structure is made up of three main muscle groups, consists of (Front Delts, Middle Delts and Rear Delts) whose name obviously shows their location on your shoulder muscle.

In this article, we will focus on the front and lateral deltoid exercises, which are more common and make a big difference in the appearance of the shoulders, and then briefly cover the posterior delt in one of the exercises.

In addition, we combine the best deltoid exercises that work for both the frontal (Anterior) and side (Lateral or medial) delts, and help you achieve a bigger muscles during your shoulder progress journey, and provide it the attention it deserves.

Finding the best exercises to cover shoulders is not easy, mostly with the front and side delts.

But we’ll cover you below in this article and will include the moves to grow delts muscles to maximum strength, but you need to pay attention to detail and follow the right steps.

The front raise is a great at-home deltoid exercise that you will want to start with, if you are looking for straightforward delt workouts, and to focus on the anterior deltoid.

The correct move steps to keep in mind, make sure while pull the weights without bending your arms, so keep your arms extended during the entire routine, by this way the stress of the exercise will be focused on the front delts rather than your chest or triceps muscles.

Let’s start the exercise one hand at a time, with a dumbbell pronated grip (palms down) in front of your thighs, then gradually raise the weights until you are at shoulder level (make sure your arm is not bent). Then return your hands to the starting position by lowering the weights.

The second exercise that comes next logically after the front raise, is the lateral raise, which focuses on the side (lateral) delts.

Now most people do lateral exercises with both hands, this is a mistake!

The upgrade version is to focus on one arm every time. The purpose behind this is to allow access to heavier weights with a wider range of motion and better control during the routine.

Start the workout while standing straight, using dumbbells with a pronated grip, keeping the weights hanging at your sides, now begin to raise your arm to the side, then slowly return to the starting position.

To get a better exercise performance and to hit the delts effectively, be sure to lean your chest forward about 10-12 degrees, keeping your elbow slightly bent.

Behind the Neck Press 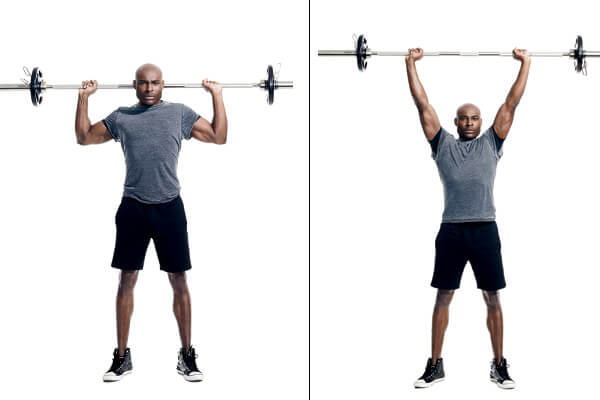 The overhead press, are a medial delt exercise, is when you lift weights behind the neck.

When you move a barbell or dumbbells behind your neck, you are actually shifting the focus of the press from the front to the lateral delt.

Start the exercise with a light weight until you practice the correct steps, with a pronated grip of the barbell a little wider than the width of your shoulders, place it behind your neck, keeping your elbows tights under the bar (make sure not slide to sides), do not move them backwards during the exercise.

Now press the weight up until your hands are fully extended, then lower the bar until it touches the top of your shoulders. Then repeat.

If you do not have a fitness bar, try to find another alternative such as a metal pipe or a wooden bar that is heavy enough and will allow you to start your workout. 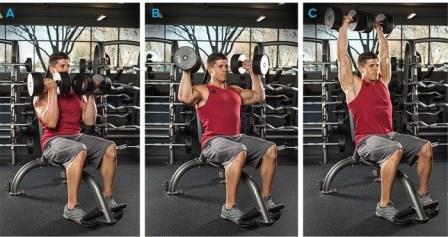 It is a popular yet worthy exercise to practice, and is the best way to perform while seated, so you can save your strength for heavy weights and to perform at your best, while standing still available if you want to engage your core.

The exercise is a compound lift, because the motion designed by the Arnold exercise, is to hit both the front and lateral delts through the lift in same time, making it the best time-saving deltoid exercise by working two delts in one exercise.

It is a common and basic exercise that can not be dropped in any shoulder workouts, and most importantly it is a compound exercise that hits the three shoulder muscles of the front, side and rear delts, all in one exercise. Means that exercises for the posterior deltoid muscle can be performed using the classic shoulder press.

This exercise has a great potential for strength, but you need to do it right. The best way to perform is with one arm swing each time for better control and to maintain the best range of motion while focusing on one arm.

It is an isolation exercise, focusing mainly on the lateral delts (with a slight change during the performing, by bending your chest slightly) and which provides an opportunity to workout with heavy weights, hitting the muscles at different angles and different resistances to develop effective delts.

How to perform Upright Dumbbell Row:

I have prepared 3 exercises from the topics that covered in this post, which will cover the 3 delts, you can try with medium weights.

Do 3 sessions of each exercise (10,8,6) times, rest for 2 minutes and then repeat. Then move on to the next exercise, and go on.

The muscles of the upper body are exposed to many risks during workouts, and the shoulders are one of them, and the reason behind this is from overuse activities, and the structure of these muscles contains many different sizes starting from short to medium.

And some of the exercises associated with these muscles may be difficult to perform or cause injury especially to heavy weights or possible wrong movements.

Based on this, it is important to be extra careful with some of the measurements to avoid such injuries:

Strategies to Consider while Deltoid Workout

In this part we will discuss some of the experience points of body builders during workout, to get some recommendations or shortcuts and strategies that you should be aware of while deltoid practice:

If you’re looking to gain a massive shoulder muscles, you need to focus more on the lateral delts, as they are the bigger of the two, and the pop up is more obvious when you’re getting them a good workout.

Make sure to warm up before starting your exercise session, to avoid any injury.

Once you have completed the shoulder exercises for building front and lateral deltoid muscle, it is better to train the other muscles of the arms, Biceps, Triceps and Forearms in order to balance the physics of the upper figure.

Affiliate Disclosure: When possible, TopFitnessHome uses affiliate links as an Amazon Associate, I earn from qualifying purchases (at no additional cost to you).

[TopFitnessHome.com] are a participant in the Amazon.com Services LLC Associates Program and the Amazon EU Associates Programmed , affiliate advertising programs designed to provide a means for us to earn fees by linking to http://Amazon.com and affiliated sites. As an Amazon Associate I earn from qualifying purchases. Full Disclosure